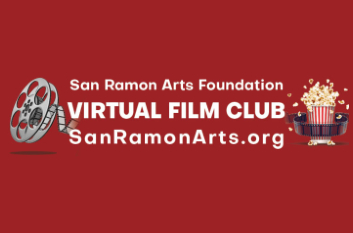 The San Ramon Arts Foundation invites you to join the San Ramon Film Club, a free virtual series where you will watch a film on Kanopy, followed by a 1-hour Q&A with a guest speaker. A donation to the Foundation is suggested and appreciated. Click here to donate.

Co-hosts Dave Owens and Patrick Gutierrez will moderate the discussions with the guest speakers.

See the upcoming schedule below:

NOTE: Please watch the film in advance of our discussion, free on Kanopy.  You will need a full service Contra Costa library card as e-cards do not work for Kanopy. Some movies may also be available on alternate streaming services such as Amazon Prime, Netflix, YouTube, Hulu, etc.

Joseph McBride is is an internationally renowned film historian, the author of twenty-two books, including the acclaimed biographies Frank Capra: The Catastrophe of Success, Steven Spielberg: A Biography, and Searching for John Ford. His 1992 Capra biography was described by the New York Times Book Review as “masterly, comprehensive, and frequently surprising.” His most recent book is Frankly: Unmasking Frank Capra (2019), about the process of researching, writing, and fighting a four-year legal battle to get his Capra biography published. McBride also has published a book of interviews with director Howard Hawks, Hawks on Hawks; three books on Orson Welles; and Writing in Pictures: Screenwriting Made (Mostly) Painless. He has also been a screenwriter and plays a film historian in Welles’s feature The Other Side of the Wind. McBride is a professor in the School of Cinema at San Francisco State University and has written a forthcoming critical study of Billy Wilder.

Cliff Edwards served as Powell-Edwards Distinguished Professor of Religion and the Arts at Virginia Commonwealth University in Richmond, Virginia, until his retirement in 2020. Born in 1932 in Southampton, New York, he earned degrees from Drew University, Garrett Theological Seminary, and the PhD from Northwestern University. He studied at the University of Strasbourg in France, The University of Neuchatel in Switzerland, Oxford University in England, the Hebrew-Union School of Bible and Archaeology in Jerusalem, and Daitokuji Zen Monastery in Kyoto, Japan.  As a Coolidge Fellow he spent two terms doing research at Columbia University’s art libraries. Among his books are Everything Under Heaven: The Life of Issa of Japan, Christian Being and Doing, Van Gogh and God, The Shoes of Van Gogh, Mystery of the Night Café, Van Gogh’s Ghost Paintings, and Van Gogh’s Second Gift. Dr. Edwards is now retired and lives in Gainesville, Florida.

Marsha Cheung Golangco is an Author, Speaker, Consultant in Environmental Feng Shui & Green Building Advisor. She serves in many organizations including USGBC (United States Green Building Council, East Bay, CA) and Cofounders of Sustainable Contra Cost & Sustainable Walnut Creek. She currently serves as the Chairperson of the Board at APAPA (Asian Pacific Islander American Public Affairs Association) Tri Valley Chapter, CA. Marsha has received numerous awards including the President’s Award of the Year of the Building Industry Association for her dedication to the advancement of professional women in the building industry. She is a recipient of an Honorable Mention Martin Luther King Jr. Humanitarian Award of the Year and Asian American Islander American of the Year (APIA) in 2020 for her numerous community contributions. Marsha holds a B.S. degree in Biology from Santa Clara University and a M.A. degree in Economics from California State University in San Francisco.  She has completed a Ph.D. academic program in Environmental Science from the University of the Philippines.

Sharing her knowledge and wisdom in the Eastern culture, Marsha co-authored two anthologies and is the author of The Power of Feng Shui Trilogy:

The San Ramon Arts Foundation was established in 2000 to encourage, support, and promote the Arts in San Ramon and the San Ramon Valley. The Foundation grants financial assistance to cultural arts, organizes special fund-raising events, and supports local artists.
Join Our Board

We’d love to hear from you! Are you an Artist or know of some great Art? Have a question? Have a suggestion? Want to get involved in the San Ramon Arts Foundation? If so, let us know? We look forward to hearing from you.